The artists and craftspeople who created a jewel on the hill

Roystonhill Spire Park outlines the footprint of Townhead-Blochairn Parish Church which stood on this site from 1865 until 1997. 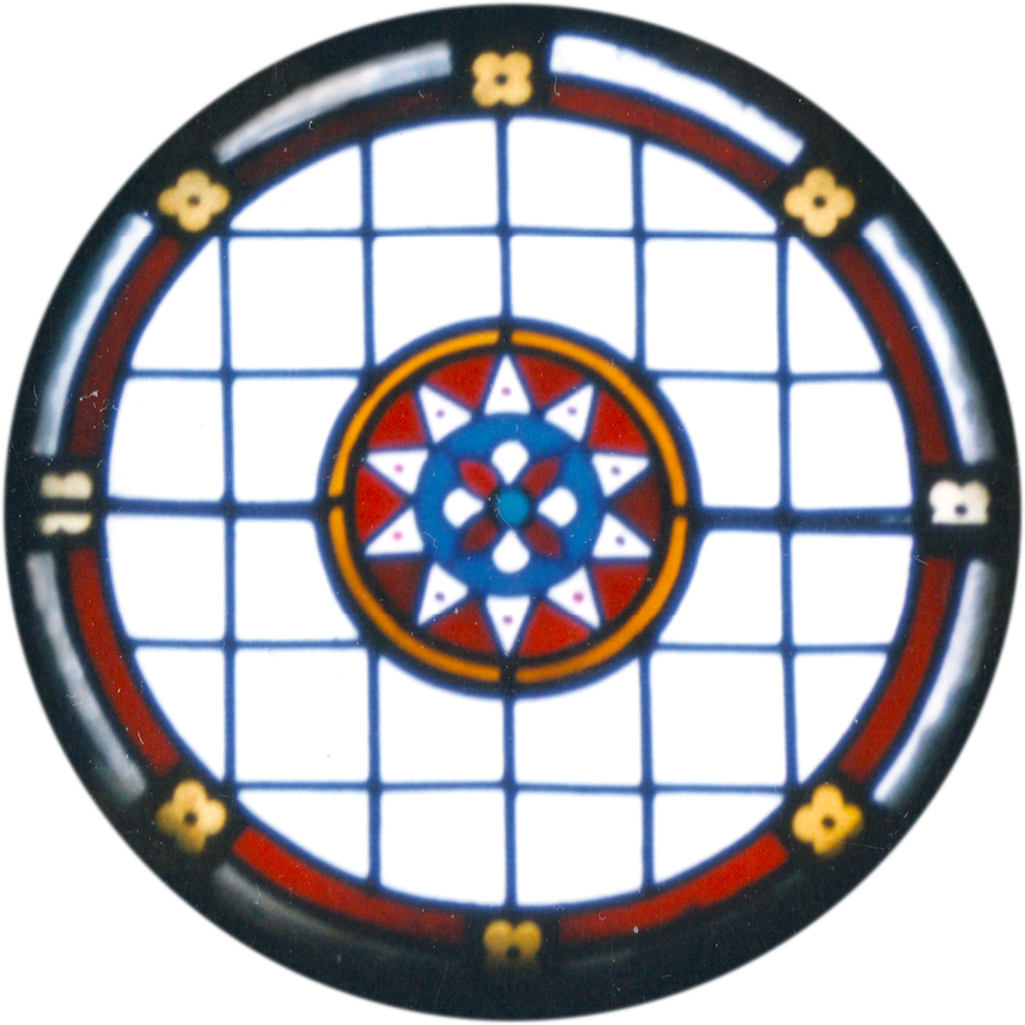 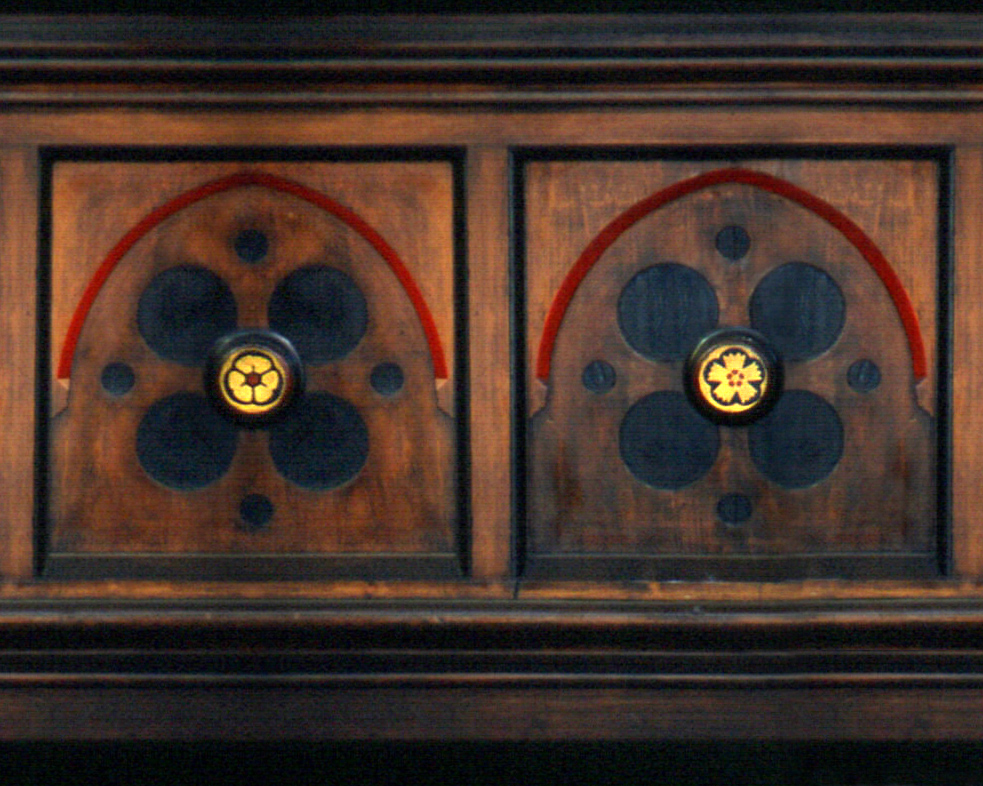 The church was richly decorated by a young Glaswegian artist Daniel Cottier. The full painted-scheme in Townhead one of his earliest works, featured stencilled and gilded woodwork, geometric coloured glass and metal light fittings.

Cottier worked with Alexander ‘Greek’ Thomson on Queens Park Church and Dowanhill Church, now known as ‘Cottiers Theatre’ where you can still see examples of his work.

Cottier’s showroom in London was visited by the painter Vincent van Gogh, an admirer of his work. He also opened studios in Paris and New York where he contributed to the ‘Gilded Age’ of design and manufacture.

In later years much of Townhead’s rich colour scheme, including the ceiling which had been painted by Cottier in sky blue with silver stars was painted over – fashions had changed and people didn’t recognise its importance.
The building declined sharply after the congregation left in the 1990s and despite being A-Listed it was sold as a warehouse and neglected.

Tantalisingly, as the layers of paint flaked-away, intricate floral patterns began to reappear around the church.
Sadly all the Cottier windows were destroyed – although some fragments of glass and some stencil work remain, if you look very carefully on the arches next to the spire.

The great south window of Townhead Church was designed by William Morris in collaboration with Edward Burne-Jones, Philip Webb and Ford Madox Brown – leading lights of the Arts and Crafts movement. These windows were Morris’ earliest work in Glasgow. 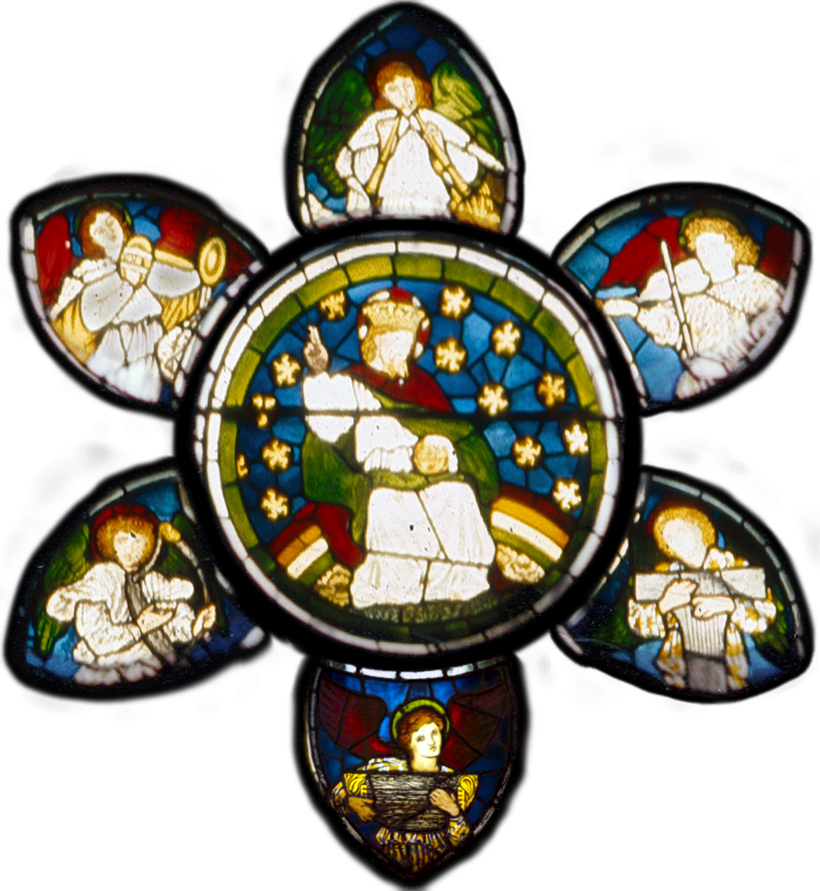 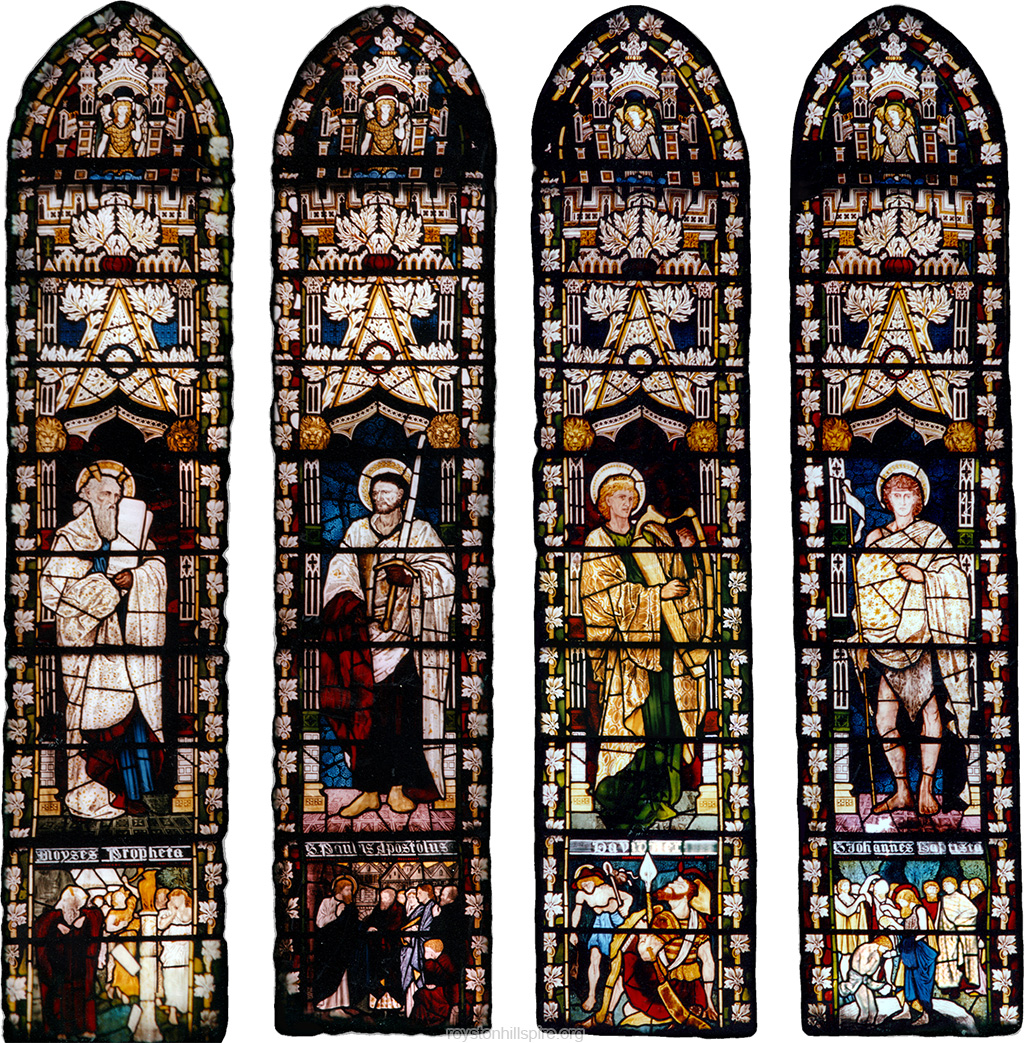 The upper window depicts Christ in majesty, seated on a rainbow, surrounded by stars.

The four lancet windows are of Moses, Paul, David and John the Baptist, with the base of each window illustrating an incident in the life of the figure above – the Golden Calf, Preaching at Athens, David slaying Goliath and the Baptism of Christ.

‘David and Goliath’ is a unique window, never having been repeated by the Morris Company anywhere else.

In 1992 the Morris windows were removed and are now kept in storage by Glasgow Museums.

Townhead’s ‘Father Willis’ pipe organ was renowned for its beautiful tone, and the impressive acoustics of the building made it a popular annual venue for recitals by the Glasgow Society of Organists.
In 1993 the organ was removed from Townhead Church, and in 2002 it was rebuilt in St. Margaret’s church Knightswood.
Some faint remnants of Cottier’s paintwork can be seen on the pipes, indicating that originally the organ must have been ablaze with colour as well as music.

The following newspaper excerpt from 1866 describes the church on its opening day:

We congratulate the city on the addition of this place of worship to the list of its churches. From the Cathedral and Necropolis, visitors may have observed this large and handsome building, with its massive spire. It is of the form usual in the larger Gothic churches—namely, aisles and a clerestory. The latter is supported from the inside on massive stone arches springing from iron columns. These side aisles contain galleries. The style of the architecture is 13th century Gothic, rather French in character. In the front are three large doors which give ample egress for the congregation. Above the centre door are elegant windows, rich with carving – two double lights and an ornamental circle above them. The spire, especially from some points of view, is noble and massive looking—in this respect more like an ancient one than the attenuated examples common in recent times. Its traceried windows and pinnacles give it an exceedingly rich and handsome appearance; and at the same time its general outline is graceful, especially when seen on the diagonal. One of the best views of the church is from behind. The back jamb, containing the hall and session-house, which seems quite as handsome as the front, the great pulpit window above these buildings, and the spire rising behind, form a very picturesque group. This view of the church will be very conspicuous from the proposed East End Park.
In the vestibule of the church is a marble slab, set in an ornamental niche, stating that the church has been erected in memory of the late Alexander Baird of Ury, and endowed by his brother, James Baird of Knoydart. In one of the side arches an organ, by Willis, of London, one of our best makers, has been erected,
The interior of the church is very magnificent. The walls and ceiling are a mass of coloured decoration, From the dark wood work of the panelling, the colouring is toned through bands of ornament up to the airy blue of the ceiling, ornamented with representations of palm leaves and sparkling with stars. This amount of decoration is new on this side of the Tweed, and rare even in England. Its effect suffers at present from the want of the stained glass window behind the pulpit, which is being made by Morris & Co of London. This will have in its four lights, large figures of Moses, David, John the Baptist, and Paul, with a scene from their lives represented under each.
The general effect, however, of the decoration is rich, and at the same time solemn and church-like. The blending of the colours is harmonious, and the various patterns show great skill and fertility of invention on the part of the artist. From its splendour and the originality of its design this building is another proof that our own city can hold its own against its neighbours in art as well as mechanical skill.